Hello and welcome to my version of the game, ‘F*@#’, Marry, Kill. This week we are WWW’ing Historical Fictional Characters.

Myself and some of my friends are sharing our Want, Wed, and Waste choices from this week’s list: 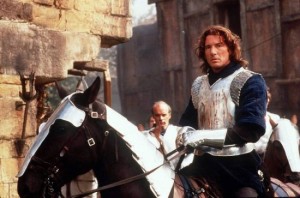 (The Zorro franchise is pretty strict about copyright, so rather than post a pic, I inserted a link to a movie clip) Click here for a ZORRO Movie Clip (Of Antonio Banderas and Catherine Zeta Jones)

Want: Zorro, because of all that mystery and danger. And because, in the above-linked scene, he was soooo sexy, it made me wish I was Catherine Zeta Jones! (Or wish that I was Antonio Banderas, she’s pretty hot too ;)) I was going to say I also want him because of how fast he moves, but then I realized that might not be a plus.

Wed:  I guess Sir Lancelot so I could live in a castle. With Robin Hood I would have to live in the woods. And Richard Gere as Sir Lancelot, come on…who could resist that? Although since Lancelot was stealing King Arthur’s woman, he might not be faithful. But on the other hand, I would be ‘Wanting’ Zorro, so I guess I wouldn’t exactly be faithful either.

Waste: Robin Hood, although that probably makes me a bad person since he steals from the rich to give to the poor. But if I was married to Sir Lancelot, I would be rich, so he might steal from me. So yeah, I would have to waste him. But if he looked like Russell Crowe, I would definitely do him first.

WANT – Robin Hood. Defender of the downtrodden—and too gorgeous for words. You can haul me off on your horse any day!

WED – Has to be Sir Lancelot. Let’s face it—Guinevere caused him nothing but misery. Lancelot is a tragic character, and he needs the love of a good woman to turn his life around. I’m volunteering!

WASTE – Sorry, Zorro, but you lose. I just can’t be sure what’s behind the mask and cape. The others are a sure thing.

Want: Zorro – Antonio Banderas. When he focus his attention on his heroine (me), I am living a character in one of my own books. YUM.

Waste: Sir Lancelot – I hate to say that Richard Gere is a waste, but compared to the other two… there’s really no choice.

Want: Zorro, of course. I love a hero who can wear a cape with style and the Latin lover accent is a complete turn on. I don’t mind the mustache or the color black, so all in all he’s a ‘stallion’ in my book.

Wed: Robin Hood. He does the right thing, stands for something legit and is faithful to his lady. He’s used to outdoor living and probably knows how to throw a mean BBQ supper, and there’s always a ready supply of ale. He can steal my heart anytime!

Waste: Lancelot. He’s the least romantic one for me. Other than fall for King Arthur’s wife I don’t recall anything memorable about him except for having the guys over and sitting a ’round’ the table (haha). Sorry, but it’s good ‘knight’ and goodbye for him.

Want: Robin Hood. He looks good in tights and he’s good with a bow. That means strong hands and arms. But he has that whole “merry men” thing going on and hanging out with his buds. If the Sheriff of Nottingham came knocking, ol’ Rob would take off to create mischief. But that’s cool. He has a sense of honor and looks out for the poor but I think he’d want to hang with the Merry Men instead of staying home at night.

Wed: Zorro. Oh be still my heart. Sexy, Latin lover who likes to play at being someone else? There’s just something about a man in a mask… His love life would definitely be filled with spicy heat. He has a well-honed sense of duty and honor (are you sensing a theme here? LOL) and I bet he dances a mean tango, which is the dance of love. He might dash off to save someone but he’ll come right home, a rose in his teeth and a look of “I want you” in his eyes.

Waste: Sir Lancelot. Yeah, yeah. Knight of the Round Table, chivalrous and all that, but dude! She was married. So not cool in my book. Especially since her husband was his best friend. I don’t care how gorgeous he looks sitting on a charger, sword in hand, armor all shiny and stuff, it’s what’s on the inside that counts. And even though he sort of tried to redeem himself, it just doesn’t work for me.

Darcy Flynn, author of  Keeper of My Heart Website: www.darcyflynnromances.com

Want: Robin Hood! He’s charming, romantic, and a thief with a roguish smile. A short-term adventure with him would be thrilling, but he certainly isn’t marriage material. Plus, I don’t want to live in a forest.

Waste: Sir Lancelot! At one time, I would have loved to marry him, but his affair with Guinevere ruined that dream. Any man, no matter how noble and honorable, if he commits adultery, he’s not the man for me.

Wed: Then there’s the engaging and mysterious Zorro! I want to marry this romantic, well-educated, wealthy and cultured nobleman! To be Mrs. Don Diego by day, all the while knowing his secret. Dressed in black, cape flowing behind him, wielding a sword…what can I say!  *Sigh* Did I mention he’s a superb athlete! 🙂

Now we’d like to hear from you….which of these Historical Fantasy Dudes would you Want, Wed, and Waste?