Elvis has been quoted many, many times over the years. In some of the quotes, his vulnerability and insecurity come through. In some, his wisdom, and in others, his love for his fans. Those who were close to Elvis emphasized how much he loved and appreciated his fans. In spite of his unparalleled success, he never forgot how it came to be.

Here are some of my favorites… 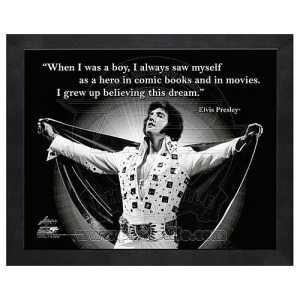 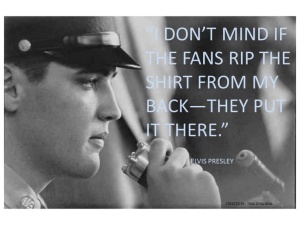 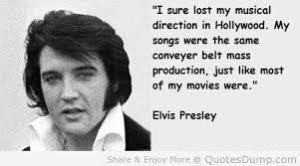 Elvis bought Graceland in 1957 for $100,000 for his mother. Sadly, she died a year later. Elvis continued to live there for the rest of his life. I think it’s admirable that he remained in his home town, rather than moving somewhere more upscale or buying lavish homes all over the country.

Graceland was opened to the public in 1982 and is the third most visited home in the United States. More than 600,000 people from all over the world come to see Elvis’ home each year. I have been to Graceland five times, and I plan to go again. Everyone, especially Elvis fans, should experience Graceland at least once. I cannot fully convey the feeling of being in Elvis’ home. I swear, you can sense his spirit. There is something humbling and awe-inspiring about entering the place where the ‘real’ Elvis dwelled, where he found refuge from the insanity of the outside world. 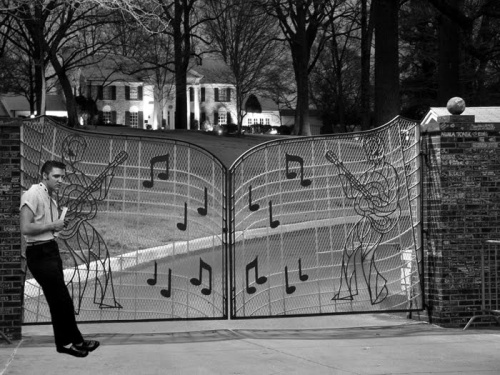 My trips to Graceland:

1978 – The summer after Elvis died, I had the opportunity to go to Nashville and Memphis with a friend and her family. At the time, the house was not open, so we only toured the grounds.

1992 – My youngest sister, Christi, my two daughters, and I were flying to San Antonio to visit another sister, Sheri. I was pregnant with my third child, my son, (who would be named Presley, although I didn’t know it at the time, because I hadn’t convinced my then husband to agree to it. :)) We had a layover in Memphis and due to various mechanical difficulties with various airplanes, our wait ended up being 12 hours. We decided to take a cab to Graceland. We had our carry-on luggage with us, and it was quite interesting going through the narrow stairway with huge bags on our shoulders. I was afraid we were going to break something priceless. 🙂

2001 – My sister, Ruth, and her husband, Tom, took me to Graceland for my fortieth birthday. WOW, what an amazing trip that was. Not only did we spend a lot of time on Beale Street, experiencing Graceland with the person with whom I shared such a close Elvis bond was incredible and unforgettable. My brother-in-law, who had never been a big Elvis fan, was overwhelmed by Graceland and the whole ‘Elvis’ experience. Funny story, while we were there, one of the fans was arrested for jumping into the pool at Graceland. I heard she had to pay a $200 fine. I’m sure it was worth it to her to be able to tell people she took a dip in Elvis’ pool.

2006 – I drove to Atlanta for a writer’s conference with two of my friends, Jody and Christy. We spent the night in Memphis and went to Beale Street, and they wanted to see Graceland, at least briefly. So, we stopped by and hung out for a little while in front of the gate.

2013 – I took my adult kids, Lana, Lacey, and Presley, and my niece, Madison, on a trip to Memphis and Atlanta. (We traveled to Atlanta for Vampire Diaries stuff and Cincinnati Reds/Braves games, but spent the night in Memphis on the way). We stayed in the Heartbreak Hotel and toured Graceland. I’ll have to say, the rooms in the hotel are sub-par, but the lobby is pretty spectacular. The kids were impressed with Graceland and we all had a wonderful time. Presley was especially moved. On the tour, a lady in a wheelchair was watching an Elvis video in one of the exhibits, with tears streaming down her face. In the meditation garden where Elvis is buried, the woman’s son was taking a pic of her, and she was still crying. He said, “Stop crying so I can take your picture, Mama.” 🙂 It was so precious. We saw her after the tour in front of the house. Presley patted her shoulder and knelt next to her chair and said, “My name is Presley.” He pointed at me. “Thanks to her. She’s my Mom.” (or something along those lines) Her eyes lit up and she said, “Aww, can I shake your hand?” He gave her his hand and she squeezed it and kissed the back of it. We were all in tears. Such a poignant moment. 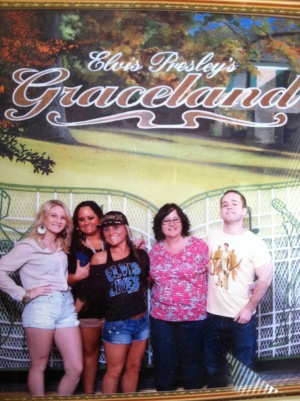 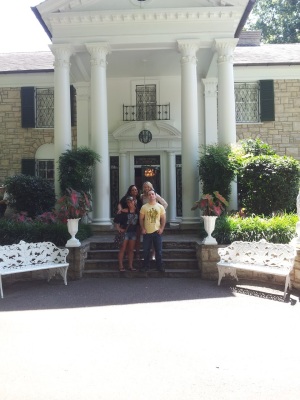 Such beautiful memories. I can’t wait until the next trip to Graceland. I would love to go sometime during Elvis week, or especially at Christmas. I bet it is breathtaking during the holidays. Have you ever been?

Elvis: That’s the Way It Is was Elvis’ first non-dramatic film, a documentary chronicling live performances from The Elvis Summer Festival at the International Hotel in Las Vegas. The film features shows Elvis performed on August 11, 12, and 13, 1970. Who would have imagined that, seven years later, he would be gone? He was so vibrant and sexy and alive at the time that it is mind boggling to think about.

One of the things I loved about the film was that it not only showed some amazing concert performances, but it showed the ‘behind the scenes’ Elvis hanging out with his entourage, rehearsals, fans commenting on what they love about him, and celebrities such as George Hamilton, Cary Grant, Juliet Prowse, and Sammy Davis, Jr. arriving for opening night.

I was only nine years old when the film released, and I remember watching it, enthralled. At the time, I had never been to an Elvis concert, and it was a thrill to see him perform. And, to see glimpses of the ‘real’ Elvis in how he interacted with his friends and the people who worked with him.

That’s the Way It Is featured some fabulous songs, some that people who aren’t true Elvis fans aren’t all that familiar with, such as How the Web Was Woven. Here is a brief clip of him singing part of the song in rehearsals as he plays the piano. Watch what he does at the end:

Here is a recording of the entire song:

One of my very favorite songs from the performances is Just Pretend. I love it so much, I named my first romance after it (I wrote it when I was eleven). I also named my hero Lonnie Beale after Elvis’ character in the movie, Tickle Me. And, I described him as looking like Elvis. 🙂 I still have the story, written mostly in pencil with the first page missing from the tattered spiral notebook. At the end, my heroine thinks Lonnie died in a plane crash, but as it turns out, (Spoiler alert!) he’d taken a different flight and he comes to her where she’s crying on the beach, and he sings Just Pretend (which has a line, “I’ll come flying to you again.” – see how I cleverly wove that in?) It was a riveting moment, LOL.

Here is his concert performance of Just Pretend:

Wasn’t he so sweet to his fans? Lucky, lucky woman.

I was excited to learn that the re-mastered version of That’s the Way It Is will be showing in select theaters this month. It is coming to Oklahoma City, and I must go. So, I’m off to check on tickets. Until next time…