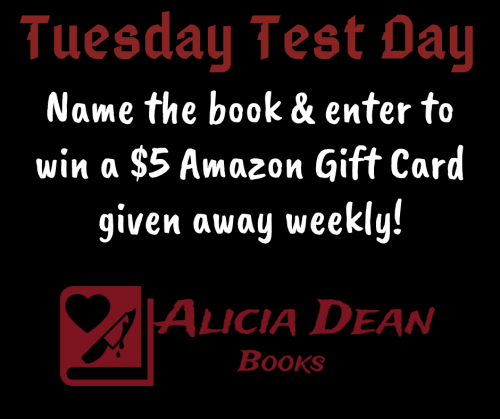 Welcome to Tuesday Test Day! Each Tuesday, I share a snippet from one of my stories, along with three options. To enter, guess which of the three options the snippet is from.

Post your answer in the comments before Sunday evening at 5 p.m. CT. (You may respond here or on my Facebook page). Each Monday, I will randomly draw a name from all the correct answers and that person will win a $5 Amazon Gift Card. Winners will be announced in the next Tuesday Test Day post.

Congratulations, Sue!! Please email me at Alicia@AliciaDean.com and I will send your $5 gift card. Thank you for playing!

(The correct answer was Smashing Pumpkins from Love Breaks)

Which of the below stories is this snippet from?

She braced her hands on the door, intending to step back. Before she could, Eli lifted his head and whipped it toward her. He couldn’t have heard her, could he? She’d barely made a sound. Maybe he just sensed—

Her thoughts ceased when she took a closer look at Eli’s face. He stood in place, breathing heavily. She narrowed her eyes. God. No.

His features were somehow distorted, his skin had a gray cast and looked… crumpled. His eyes glowed red. Something dark and liquid—blood?—was smeared around his mouth, dripped off his… fangs?

“No!” She let out the cry before she could stop herself, then clamped a hand over her mouth.

Backing from the door, she shook her head violently from side to side. It couldn’t be. No way. She had to have imagined it.

A sound at the door told her Eli was coming out. She turned and fled. Her tennis shoes slapped the ground, the noise reverberating in her ears along with the word—vampire… vampire… vampire. Oh my God. Vampire… Bats… Drained…

A hand landed on her arm. She screamed and stumbled, nearly falling to the ground. Eli pulled her up and whirled her around to face him.

“Let me go!” Terror strangled her vocal cords. She jerked at his hold, but couldn’t budge him. His face was back to normal except for the red eyes. Trembles shook her body.

“Calm down,” he said, so softly she almost didn’t hear him.

He wiped blood from his mouth. Blood. Oh God.

Nausea surfaced in her throat. She clutched her stomach, afraid she was going to throw up.

“Don’t touch me.” Her voice came out hoarse from her raw throat. She jerked her arm again, and this time he released her.

He held his hands out. “Liberty. Let me explain—”

“Explain what? That you’re a—a vampire?” She wrapped her arms around her body and backed away. “How is that even possible?”

Eli squeezed his eyes shut. When he opened them, the red was gone, and they glinted their usual silvery blue. The moonlight reflecting in them made them look like Christmas tinsel.

“It is what it is, sweetheart.” A muscle ticked in his clenched jaw. “I’m a vampire.”

He shrugged. “You’re the one who came to my house in the middle of the night.” He was still moving slowly toward her. His eyes roamed over her body. “I can only guess why. ” His voice was low, hypnotic. He jerked his head toward his house. “I can send her packing if you’d like.”

His mouth curved in a slow smile. “Did she look dead? I assure you, a killing was not what you interrupted.”