Gothic Mystery Romance from Scotland ~ Ghost in the Rain #AWorldofGothic

Tis the season…what better time to get lost in A World of Gothic?

A group of authors from countries all over the world were drawn together by our love of the classic gothic mysteries by authors such as Daphne du Maurier, Victoria Holt and Phyllis A. Whitney.

While the stories are stand-alone, they each share a recurring thread of a Spinel stone, which can play a small or large part in the plot. We have stories set in Scotland, Greece, Oklahoma, Florida, France, Ireland, and more.

Ghost in the Rain: A World of Gothic – Scotland by Marie Treanor

**** Contest! Win a $50 Amazon Gift Card – I’ll be sharing all 10 books on my blog on various days and on Oct 31st, I’ll share all 10 in the same post. On November 5th, I’ll draw a winner. Receive additional entries for each task you perform. (Details below)

A haunted Highland house, battered by storms and murder…

Notorious rocker Dan Stewart isn’t anything like Dr. Kate Yorke imagined. Arriving at his remote home in the Scottish Highlands to research some valuable letters, Kate soaks up the Gothic atmosphere. But it’s Dan who truly fascinates her.

I had to acknowledge that my peace was churned up by his unexpected presence here. It wasn’t even an unpleasant feeling; in fact it felt rather…exciting. But it was disturbing.

I took off my glasses and rubbed my eyes. I suspected Dan Stewart carried such disturbance wherever he went. If I thought about it, the whole house felt different now. As if its peace had gone too; as if it had sprung to life, eager, waiting.

Mocking my own silly fantasy, I stood abruptly and paced around the room, trying to recover my lost concentration. I suspected I was just tired and would work much faster and much better after a good night’s sleep.

I paused by the window to watch the storm. Although the thunder had stopped, the wind and rain were still blasting the trees and rattling the window. Close-up, I could feel the draught through my thick sweater. On impulse, I retrieved my phone from my bag and tried to capture the raging storm on its camera. But it looked too tame on the screen, not deep or dark enough, no real movement in those black clouds still scudding and swirling across the sky. I wished I could paint. For a moment, I even wished I could be part of it, to go outside in it again. There was nothing to stop me, except common sense.

I smiled to myself and lowered the phone, just as a movement in the garden below caught my eye. Someone was out in this. Someone not remotely dressed for it either. Through the darkness and the almost opaque mist of rain, I could make out only that it seemed to be a woman wearing only some kind of floating, white, wispy garment, more like the loungewear of wealthy women of past centuries than anything anyone would wear today for any purpose. The odd garment shimmered as the figure glided across the lawn, impossibly graceful.

On impulse, I raised my phone again and snapped.

Perhaps she moved too quickly. Nothing of her showed on the screen except an indistinct blur of light against blackness. Frowning, I looked again out of the window, but the woman had gone. Vanished. 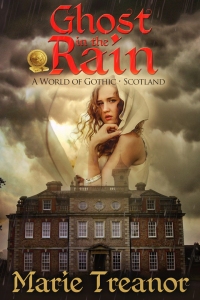 Check out all the stories here…

**** Contest! You will receive an additional entry for doing each of the following: