First off, thanks, Alicia, for inviting me to visit with you.  It’s great to be here.

You’re welcome. Happy to have you!

Today I want to share with you my latest release, Taking a Chance.  This is the second book in the Chances Are … Series.

A little backstory.  Ghost of a Chance is the first book in this series, where the heroine is denying any psychic abilities and the hero unknowingly buys a haunted house.  Halfway through the story, the heroine’s mother, Aerial, arrives.  Frankly, she takes over the story.  I had to sit down and have a serious conversation with her, reminding her I was telling her daughter’s story, and if Aerial would just be patient, I’d tell her story.  And here it is.

Blurb for Taking a Chance:

A psychic.  A cop.  A lover of conspiracy theories.  And a kidnapping cold case.  Available now.

Can Aerial Bonné, a free-spirit psychic, and Frank O’Malley, a skeptical cop, work together to solve an abduction that happened over thirty years ago?

She’s all about feelings and wants a fling with no commitments.  He’s all about protection, strength and being in control.

The bad guy kidnapped a little girl, who’s now his “daughter”.  Over the years, he’s become increasingly paranoid and believes every conspiracy he’s heard about.  Now he believes Aerial is plotting against him.

Even though they’re falling for each other sparks fly when things go wrong, will his job, her temporary visit in Minnesota and the bad guy keep them apart?

Excerpt from Taking a Chance:

“I know you’re off-duty, but do you mind if I ask you a possible work-related question.”

Frank was thankful for the change of topic. “Another missing music box?” he asked with a smile, remembering the first time they’d met. She had insisted the police department be called about Sara’s missing music box.

“No, this time it’s about a missing girl.”

His smile faded at the solemn expression on her face. “What about it?”

“I had the oddest dream last night.”

He folded his arms across his chest. “Oh?”

Aerial waved her hand dismissively.  “Never mind. Probably just my overactive imagination. I won’t bother you with it.”

She shook her head.

“You’ve probably watched one too many reruns of Without a Trace.”

She stared at him a minute as if she intended to say something, then closed her mouth firmly. “You’re probably right.”

Son of a gun. He’d obviously said something wrong. “Look, I’m sorry for teasing you. I do want to hear what you have to say.”

Her reluctance to say anything more tweaked Frank’s interest. What had stopped her? No matter the situation, he always wanted to pull the loose thread to see what unraveled. She’d given him an opening, and he decided that was a good excuse to see her again. “How about we go out to dinner? I can check around, and we can talk about this more.”

She hesitated a moment, just long enough for him to realize he really wanted her to say yes. “I’d like that. When are you thinking?”

“That will work. I’ll ask Betty if she can watch Jenny. My granddaughter,” she added in response to his raised eyebrow.

“Great.” What a doofus. Couldn’t he come up with something better to say? He couldn’t believe how tongue-tied he was around her. Good thing he wasn’t in the dating market. And he hadn’t just asked her for a date. He merely wanted to satisfy his curiosity about her.

“I’ll let you know for certain. I’m sure we will see each other at the Bean.”

As he exited the door, he nearly bumped into a guy loitering outside. Frank quickly assessed him. Middle-aged, mussed hair, rumpled clothes, refusing to meet his gaze. Might mean something — or nothing at all. The guy didn’t smell like a homeless person. Likely just lived on his own. Probably not a threat. But he didn’t look like the usual kind of customer Frank expected to see at The Herbal Emporium. He’d keep an eye out for the guy, see if he showed up here again.

Buy links for Taking a Chance: 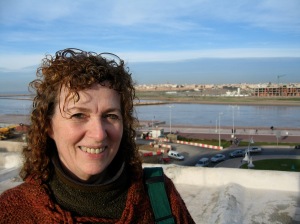 Judi has had stories in her head as far back as she can remember. However, being lazy (her friends like to point out that she’s efficient), and being a legal assistant, she knew she could never complete a manuscript if she had to write it on a typewriter. Then, along came word processors, and those magic cut and paste and delete icons. There was no stopping her after that. Within a few weeks of her first job with a computer, she started her first story, a house-beautiful, vogue thing about lawyers. Needless to say, it will never be published — but she honed her description skills on that project, so nothing is ever wasted.

Judi has recently relocated to New Mexico and is living in the foothills of the Sandia Mountains.  No more Februarys in Maine for her. She lives with two dogs, a Yorkie, Mishka, and a MinPin, Gizmo, who have acclimated easily. Despite their small size, they rule the house.

Currently, Judi  has 13 books published in varying lengths and from sweet to spicy to very hot.  Seven are by Judi Phillips and six are by Pepper Goodrich.  Judi and Pepper each have at least one more book to be published this year.  In addition, the Campfire Circle stories, four of them previously published in serial form in the Windham Eagle newspaper, will be republished this year. A fifth short story, involving multiple wedding disasters, has been added to the series, plus a novella.

Night of Turmoil is my favorite.  It’s set in Tunisia at the beginning of the Arab Spring.  My daughter-in-law is Tunisian and I was in Morocco when it started.

You can find Judi on the web at:  http://judiphillips.com/

and read her random blog posts at:   http://sugarspice-judi.blogspot.com/

or e-mail her at:  judiphil65@gmail.com