Good morning, Susie…Please tell us a little about yourself, where are you from?

I grew up in the greater Los Angeles area.

Where do you live now?

Tell us about your family.

I am married, have one adult son, and a younger brother and sister.

No, regrettably after our last dog passed away, it was too painful to get another one.

Where did you get the idea for Death by Sample Size?

I got the idea of Death by Sample Size after a challenging meeting with a difficult buyer and visualized murdering her.

Why did you choose this genre (is it something you’ve written in before)?

This was the first book I’ve written in this genre. I chose this genre because it is the one I read and enjoy the most. I love to solve puzzles, I am curious and ask a lot of questions…some say I am nosy, LOL.

Was there anything unusual, any anecdote about this book, the characters, title, process, etc, you’d like to share?

I am an apparel sales exec and all my stories take place in the LA garment center. I keep a daily journal chronicling the quirky people I’ve encountered as well as the crazy situations I’ve been in. The journal is the core of my research and is the foundation of all I write. All of the characters I write about are based on real people. I enjoyed re-creating these real people into characters that were my image of them.

What is the most difficult thing about writing a book?

The most difficult part of writing a book was being careful not to change the point of view. I write in the first person, so if the main character wasn’t in the room, she  couldn’t comment on what happened since she wasn’t there. I had to create a group of women called the yentas to fill the main character in on things she had not witnessed on her own.

What was the most difficult thing about this one in particular?

The most difficult part of writing this one in particular was to have enough believable red herrings to throw the reader off. So far, no one has figured out whodunit.

I would rather have a bad review than no review. I write for an audience, not for myself. If you don’t get a review, you have no way to gauge where you shined or where you need to improve.

What is your favorite quote?

“When the going gets tough, the tough get going.”

What do you want your tombstone to say?

What is the toughest criticism given to you as an author?

If you can say it in five words, the author says it in ten.

What has been the best compliment?

The book was so well-written, you’d never know it was the author’s debut publication.

Who is your favorite author and what is it that really strikes you about their work?

The late great Joan Hess. I love her irreverence, her sarcasm, her wit, her ability to poke fun at the society she grew up and lived her life in by caricaturing it.

Thanks for joining me. Ha, love the tombstone answer. :D. Please tell us about your book. 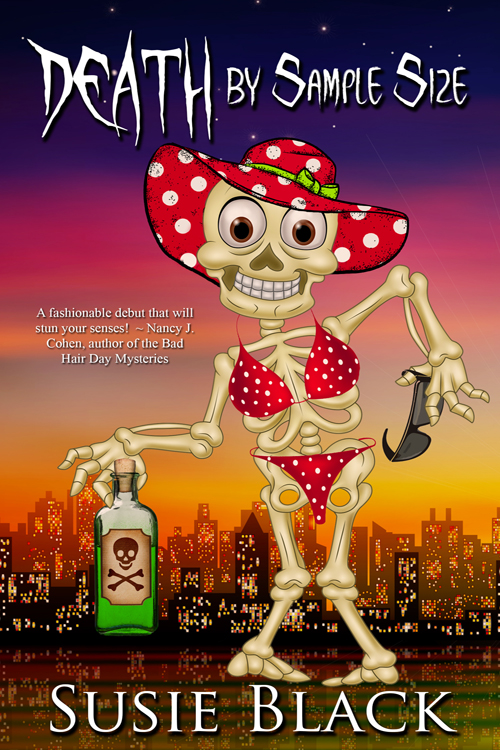 Everyone wanted her dead…but who actually killed her?

The last thing swimwear sales exec Holly Schlivnik expected was to discover ruthless buying office big wig Bunny Frank’s corpse trussed up like a Thanksgiving turkey with a bikini stuffed down her throat. When Holly’s colleague is arrested for Bunny’s murder, the wise-cracking, irreverent amateur sleuth jumps into action to find the real killer. Nothing turns out the way Holly thinks it will as she matches wits with a wily killer hellbent on revenge.

When the elevator doors opened, I had to stop myself short not to step on her. There was Bunny Frank-the buying office big shot-lying diagonally across the car. Her legs were splayed out and her back was propped against the corner. Her sightless eyes were wide open and her arms reached out in a come-to-me baby pose. She was trussed up with shipping tape like a dressed Thanksgiving turkey ready for the oven with a bikini stuffed in her mouth. A Gotham Swimwear hangtag drooped off her lower lip like a toe tag gone lost. Naturally, I burst out laughing.

Before you label me incredibly weird or stone-cold, let me say genetics aren’t all they’re cracked up to be. If you’re lucky you inherit your Aunt Bertha’s sexy long legs or your father’s ability to add a bazillion dollar order in his head and get the total correct to the last penny. Without even breaking into a sweat, it’s easy to spout at least a million fabulous traits inheritable by the luck of the draw. Did I get those sexy long legs or the ability to add more than two plus two without a calculator? Noooooooooo. Lucky me. I inherited my Nana’s fear of death we overcompensated for with the nervous habit of laughing. A hysterical reaction? Think Bozo the clown eulogizing your favorite aunt.

I craned my neck like a tortoise and checked around. Then I clamped a fist over my mouth. Cripes, how could I possibly explain my guffaws with Bunny lying there? The disappointment was simultaneously mixed with relief when there was no one else in the parking lot. Where was security when you needed them?

I toed the elevator door open and bent over Bunny. I’d seen enough CSI episodes to know not to touch her. She was stiff as a board and I attributed the bluish tinge of her skin to the bikini crammed down her throat. I was no doctor, but I didn’t need an MD after my name to make this diagnosis. Bunny Frank was dead as the proverbial doorknob.

Born in the Big Apple, Susie Black now calls sunny Southern California home. Like the protagonist in her Holly Swimsuit Mystery Series, Susie is a successful apparel sales executive. Susie began telling stories as soon as she learned to talk. Now she’s telling all the stories from her garment industry experiences in humorous mysteries.

She reads, writes, and speaks Spanish, albeit with an accent that sounds like Mildred from Michigan went on a Mexican vacation and is trying to fit in with the locals. Since life without pizza and ice cream as her core food groups wouldn’t be worth living, she’s a dedicated walker to keep her girlish figure. A voracious reader, she’s also an avid stamp collector. Susie lives with a highly intelligent man and has one incredibly brainy but smart-aleck adult son who inexplicably blames his sarcasm on an inherited genetic defect.

Susie has a giveaway for each of you… CLICK HERE to get your FREE copy of her Swimwewar Fit Guidebook.