Please tell us a little about yourself, where are you from? Where do you live now? Family? Pets?  I was born and raised in upstate NY and still live there. I still live on the same street and only a few houses away from the house I grew up in.  I have two cats – a male who likes to snuggle against my legs and feet no matter what I’m doing and a female we adopted from a shelter when she was a kitten. I think she was with a foster family that had dogs because she wags her tail all the time especially if she’s excited to see you or if you ask her if she wants a treat. I tell her she’s really a dog in disguise.

Where did you get the idea for Honor Bound? I hate to say it, but the idea for the book popped in my head one day. The only thing that I knew for certain was that the book would be part of a series revolving around a military unit consisting of a group of men with unusual abilities. It took a bit of brainstorming to get the plot ironed out.  What is the most difficult thing about writing a book? For me, the most difficult thing about writing a book is making the time to sit at the laptop and actually write. I have a day job and a family. I try to squeeze at least an hour of writing time in between when I get home from work and dinner time. It doesn’t always happen if I have errands or there’s a doctor appointment or something else comes up that has to be taken care after I get out of work.

Are there any tricks, habits or superstitions you have when creating a story?  I turn the laptop on and while it’s booting up, I get a big glass of water. After I’ve opened the word document of the story I’m writing, but before I start typing anything, I light a candle. I think of it as a signal to my brain that it time to get to work weaving the words together to make up the story.

Do you collect anything? Dust bunnies. Just kidding! Some people would say I collect books since I have so many. I collect Precious Moments figurines, but just the ones that come out around Christmas and are stamped with that year’s date.

What was your first job? I worked at a craft store while I was in college. It was a lot of fun. Unfortunately, it closed during my senior year.

What’s your favorite book of all time and why? I spent a lot of time thinking about how I would answer this question and finally came the conclusion that I can’t. I have so many books that I love for so many different reasons that I don’t think I could choose just one. What’s your favorite childhood book?  The Cat in the Hat by Dr. Seuss. I still have a copy on my bookshelf right now.

If you were stranded on a deserted island and you could have 3 (inanimate) objects, what would they be? Number one would be lip balm. My family says I’m addicted to it. Lol. The other two items would be paper and pen (provided I was stranded with the necessary provisions to survive like a knife/machete and a lighter) so I could write to my family even if they would never read the letters. If I was stranded with no provisions, then it’d have to be the knife/machete and lighter.

Would you rather have a bad review or no review?  While no writer wants a bad review, I think a bad one would be better than no review at all. I know of some people who buy books based on the bad reviews alone just to see if the book is really as terrible as the reviewer states. If you have no reviews, it’s possible readers will just pass your book on by because there are no reviews so maybe they think it’s not worth reading.

Have you written any other books that are not published?  I wrote a mystery a few years ago. I’m not sure I’ll ever publish it. I had a couple of people read it and they both told me they knew who the killer was by the third chapter so it obviously needs a lot of work.

How did you come up with the title?  Honor means a great deal to Lieutenant James Hawkins, the main male character in Honor Bound, so I wanted the title to reflect that.

How did your interest in writing originate?  I’ve always loved to read. As a child I always had a book with me, always begged my mom to go to the library so part of my interest originated in my love of books and the stories they held. I didn’t start writing until I was in college when I read a book that was assigned in a literature class. I hated the ending, everyone died or ended up miserable. I rewrote the end, saving the characters I liked and gave them a happy or happier ending. I showed it to a couple of friends who liked it and told me I should try writing my own book. I played around at it for a while, but didn’t start learning the actual craft of writing until 2009 or so. I had two books and a novella published by a small press within four years, but then life happened. I started writing again in 2019 when I realized how much I missed it. 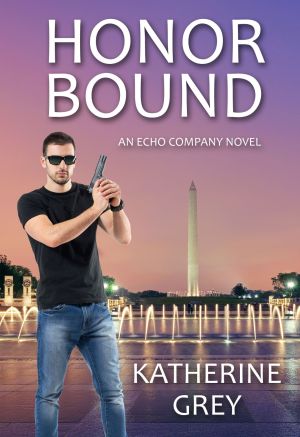 California “Callie” St. John learned the hard way just how much one night of rebellion can cost. Determined not to repeat past mistakes, she tries to be the perfect daughter by volunteering with various charities and keeping everyone at arm’s length. After narrowly escaping a car bombing, she is forced to accept help from the one man who can get past her defenses, making her long for the impossible — letting him into her life…and her heart.

Lieutenant James “Hawk” Hawkins, a member of a Special Ops unit of soldiers with unusual abilities, is known for keeping his cool in any situation. Acting as a bodyguard to the daughter of one of DC’s mover and shakers is just one more mission like any other. When an enemy from his past targets the spoiled socialite, Hawk realizes she is more than she seems.

With his reputation on the line, he’s willing to risk everything to keep her safe. But succumbing to temptation isn’t an option…no matter how much he wants to give in.

William St. John turned to his daughter. “After tonight’s events perhaps now you’ll take the threats against you seriously.”

“Those things could have happened to anyone. Before tonight any of them could have been a coincidence,” California argued.

Jimmy stared at her. Nobody could be that naïve. “There’s no such thing as coincidence.”

She glared at him, her eyes sparking with anger, showing exactly what she thought about the situation. “As I seem to have no option but to have you follow me around like a lost dog, let me be clear. I will not be changing my daily routine. You will be unobtrusive and remain in the background when I’m in public.” She ticked off her rules on her fingers.

Jimmy crossed his arms over his chest and waited for her to finish. Her slight British accent made her sound as though she was royalty giving orders to the peasants.

“Your presence won’t be needed when I’m at home or with friends. Understood?”

He took a step forward. “You listen to me, Duchess–”

“I’m not a duchess. If I were, you would address me as ‘Your Grace.’” She sounded even haughtier if that was possible.

“I’m charged with your safety. I will be the one laying the ground rules,” he continued as if she hadn’t spoken. “So until any threat to you is removed, I’ll be sticking closer to you than your panties on a hot July night. Got it?”

Bio: Katherine Grey writes sexy sweet paranormal contemporary romances and historical romances set in the Regency period. When she’s not writing, she can be found up to her elbows in flour trying out new bread and cookie recipes. She’s also a champion procraftinator, spending more time than she should making cards and crocheting.