Fatal Legacy by Krysta Scott… A ‘Friday the 13th Story’

Happy Friday the 13th!! Welcome to the twelfth of my posts about a brand new series of 13 suspenseful “Friday the 13th” short stories, each by a different author.

Today, I am happy to share Krysta Scott’s “Fatal Legacy” – Now available for sale for $1.99 or #FREE on #KindleSelect

AND…be sure to check out our contest:

Enter to win 13 FREE books brought to you by our 13 Friday the 13th authors. See contest link HERE for details. 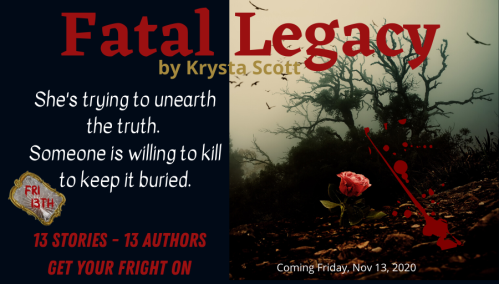 When I was a child I used to visit an arboretum. I loved the forests, gardens, and grasslands. The only thing it didn’t have was a hedge maze. It should have had one. So I gave the arboretum in Fatal Legacy a hedge maze and let my characters run wild in them.

Veronica Wiseman wants nothing more than a quiet life as an appellate attorney But. a serial killer is on the loose in her small town, destroying everything she holds dear. The people she cares about are in danger, and her childhood memories have turned dark. She soon learns that her sister’s death was not an accident and that her husband cannot be trusted.

As she tries to make sense of the tangled mess her life has become, a murderer draws closer. And it appears she is next on his kill list.

Skeletal fingers of lightning crossed the sky, illuminating her path. For a moment, she feared she was running in the wrong direction. Then she saw it. The small indentation in the farthest hedge. Encouraged, she sped up. Her feet slipped on the gravel, and she stumbled into the bushes. She grabbed onto the slender branches, attempting to gain traction, but her knees buckled, and she swayed into the bush. Steadying herself, she leaned into the fullest part of the bush and pushed off. She stumbled to the center of the path—just as a large blade shoved through.

“Oh my, that was close, wasn’t it?” The eerie voice mocked her.

Gasping, she ran, the frightening laughter following her down the pathway.

Adrenaline fueled her with renewed purpose. She flew across the gravel. The narrow passage loomed ahead. A place where the bushes didn’t quite grow together at the corner. Not usually noticeable to an adult but obvious to a twelve-year-old child, crawling on her belly in an attempt to hide from her sisters. Still there. Her breath whooshed from her in relief. It was just as she remembered.

“What are you doing there, Lorelei?” That chuckle again.

It sent icy shards over her skin.

Her hand flew to her mouth, and she froze. It was like he was right behind her instead of on the other side of a line of thick shrubs.

She fell on her hands and knees. Answering him would be a futile effort. He already knew where she was, and it would be worse to let him know what she was doing. Grabbing the nearest branch, she dragged herself into the small gap between the bushes. Her hips hit a higher branch, wedging her body between the ground and shrub. Stuck! She couldn’t go any farther. The last time she’d attempted this she wasn’t even in a training bra. She’d been so thin she could slide through a leaky sieve. Now, puberty had endowed her with full hips. Her heart thudded.

She had to make it through the opening. Her life depended on it. She tugged harder. With a sickening scrape along the gravel, she moved a little farther. Biting her lip, she slipped along the mud in slow motion—trapped in one of those nightmares where you can’t run. She needed more time. 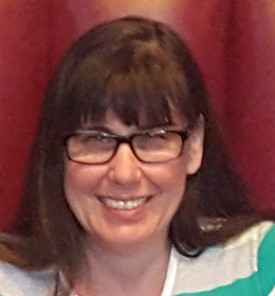 Krysta Scott has always been a daydreamer, imagining worlds far away with happy endings. When she was in fifth grade, she was so caught up in fantasy she earned the dubious distinction of being named the girl who daydreams the most. The award for this questionable honor was a colorful transparent plastic poster made to look like stained glass. It was very cool. Given her flights of fancy, it came as no surprise to her family when she announced she was going to be an actress. Unfortunately, her pursuit into theater didn’t last long, because she was too withdrawn and shy to exhibit any talent in this area. Left with no other choice but to pursue a more practical avocation, she decided to major in psychology and then go to law school. Not able to let go of the worlds she created in her head, she returned to writing and was very excited when the Wild Rose Press contacted her first book.