I’m sure everyone knows the details of Elvis’ stint in the Army, but since the anniversary date is coming up, I thought I would use that as my blog topic. March 24th will be the 57th anniversary of Elvis’ 1958 induction into the Army, a day dubbed “black Monday” for his fans by the press. Elvis was drafted, and while he could have gone into Special Services, or avoided the draft altogether, he chose to serve. His decision resulted in many changes in his personal life and career. One thing it did was to alter the opinions of many of the older generation who gained a newfound respect for someone they’d previously accused of being vulgar, animalistic, and offensive.

Although he was terrified he would lose his foothold to fame, and he was terribly homesick, Elvis served his two years on the army, working alongside the others, requesting to be treated like any other soldier. Elvis pulled KP duty like the other soldiers, became a pistol sharpshooter, and mastered the tanks obstacle course. When Elvis was asked about his decision to serve as a regular soldier instead of as part of the service club. He said, “I was in a funny position. Actually, that’s the only way it could be. People were expecting me to mess up, to goof up in one way or another. They thought I couldn’t take it and so forth, and I was determined to go to any limits to prove otherwise, not only to the people who were wondering, but to myself.” In doing so, Elvis gained the respect of his fellow soldiers, who have attested to his wish to be seen as a regular soldier, despite his fame, and to his generosity while in the service. He donated his Army pay to charity, purchased TV sets for the base, and bought an extra set of fatigues for everyone in his outfit. 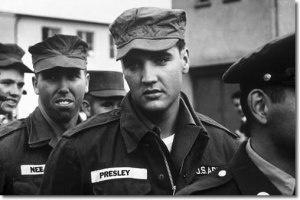 During his time in the service, two life-altering experiences occurred. His beloved mother, Gladys, passed away and he met Priscilla, who would later become his wife. Elvis also made many friends in the service, among them, Joe Esposito, who would become his assistant/road manager/right hand man, and Charlie Hodge, who sang with Elvis, handed him his scarves and water on stage, and performed various other important tasks. Both men loved Elvis dearly and stuck with him to the end.

The most tragic event in Elvis’ life, of course, was the loss of his mother. He was in Texas when Gladys became ill, he requested emergency medical leave, but it was denied. After he threatened to go AWOL, the army approved his leave, and the officer who originally denied his request was disciplined. It’s a good thing Elvis was able to be by her side. I can’t fathom how much more difficult her death would have been for him had he not seen her one last time.

Elvis had many admirable qualities, but his serving in the Armed Forces might be one of the most impressive, if you really put it into perspective. In today’s world, can you imagine Justin Bieber, the members of One Direction, or Justin Timberlake taking a break from their career to serve in the Army? (I realize Bieber is Canadian, and I think One Direction is British, and I adore JT, I’m just making a point here :))

As we all know, Elvis did NOT lose his foothold to fame. Although he didn’t perform live for 8 years after his return, and most of the records he made were movie sound tracks, the first record he recorded after his return was phenomenal, containing songs like Thrill of Your Love, Like a Baby, and Reconsider Baby. (I realize this might come as a shock, but I actually own the CD) 🙂 I’ll close with a video of one of my favorite songs from the original track list:

Don’t forget about the giveaway. One commenter on this previous blog post will win: 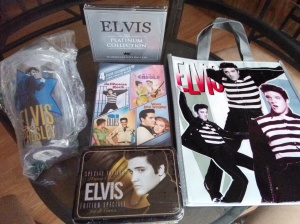