I am happy to introduce fellow Crimson Romance author, Nora Snowdon, as my guest today.

What’s the main thing you could get rid of in your life that would give you more writing time?

Procrastination. I love writing when the story is flowing and I am being surprised by what happens next, but many times I just get stuck. Then I’ll find myself doing practically anything to avoid staring at my accusing computer. When I pull out the vacuum, the cat knows I’m near the end of my rope.

I am sure most writers struggle with that very thing.

What’s your favorite book of all time and why?

I have different books that have called to me at different stages of my life. “A Confederacy of Dunces” by John Kennedy Toole was my fave in 1980. “Midnight’s Children” by Salmon Rushdie in the 90’s. Alice Brookner and Anita Shreve also have written many books I’ve loved. I seem to be reading mostly Romantic Comedies these days; Jane Fallon, Anne Charles, early Marion Keyes. All books are escapism for me, but where I want to escape to seems to change periodically.

What do you want readers to come away with after they read your books?

I’d like them to be thinking, ‘Oh I have to remember that line.’ several times throughout the book. Afterwards, I hope they feel the fuzzy warmth of a good romance with a few chuckles.

Good answer. That would mean your story really stayed with them.

What genre have you never written that you’d like to write?

LOL. Wouldn’t we all? From our keyboards to God’s ears.

If you were stranded on a deserted island and you could have 3 (inanimate) objects, what would they be?

A lot of wine, chocolate and, of course, a friendly volleyball.

Right, because who could ever be lonely with a volleyball friend. 🙂 Or with wine or chocolate come to think of it.

Thank you again for agreeing to be my guest. I enjoyed chatting with you.

Nora is giving away a copy of Accidental Arsonist to one commenter, and that same commenter will get their choice of any Alicia Dean title for the Kindle or Nook. Drawing to be held this Wednesday, February 13. Be SURE to leave your email address in your comment.

Now, for a glimpse into Arsonists Anonymous… 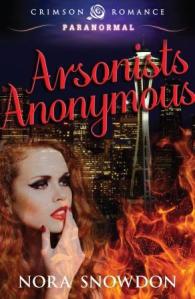 What’s a girl supposed to do when she finds herself inadvertently starting fires? Lucinda Dawson becomes a firefighter to help mitigate her guilty conscience. But she gets more than she bargained for when she signs on with the Seattle Fire Hall headed up by the ruggedly handsome Captain Josh Reynolds.

To make matters worse, she is assigned part time to work with Arson Inspector Byron Morgan. A man used to making his own rules, Byron both threatens and thrills her. But is his interest in her merely a ploy in his own game to beat out his old rival?

Lu must fight more than fires in her struggle to keep her secret safe and her heart secure.

Red continued along the right wall to a locked door. He raised the Halligan, using the adze side to pry the door open.

Lu sensed the danger a little too late. “No!” she shouted over the splintering of metal and wood. Red half-turned to her with a look of confusion. Lu reached out and yanked him backwards. He lost his balance and crashed to the floor as a fireball barreled past him from the gaping doorway.

The fire was accelerating way too fast.

Lu grabbed his arm to help him scramble to his knees. She could still hear the woman, only she seemed to be in the next room over. Red started back down the hallway, but Lu ignored him, instead crawling toward the woman.

“No. That beam is coming down!” Red grabbed Lu, jerking her back the way they’d come.

A loud crash cut her off and she turned to see a burning hunk of beam from the ceiling had crashed to the floor where she’d just been. Red pulled her arm again and she followed him. They neared the splintered door. Reynolds’ voice on the radio ordered them to evacuate. As they ran outside Reynolds grabbed her other arm and the two men pulled her clear.

“Open up the deck gun,” Reynolds shouted over the radio.

“Roger.” Ace’s response crackled back. There was the air horn warning blast, immediately followed by a thick stream of water arching onto the top of the building.

“Break open the west windows to vent,” Reynolds pointed to the least damaged side of the house.

That was it then. Lu’s stomach twisted. Once they were blasting the fire with water, there was no way anyone could go back inside to rescue the woman. It’d be too dangerous. And the woman was too far inside for them to cut through from the outside walls to reach her. The wailing of Bellevue 2 truck and the ambulance cut through the cacophony. For a brief moment Lu wondered if the second crew could help get them inside. Then she realized that she no longer heard the screams. Shit.

Arsonists Anonymous is available in print or e-book at:

Living in New York and Toronto, Nora Snowdon was a jerk of all trades—one week hawking toys at major toy conventions, the next in a high end jewelry store pandering to the rich. She worked in the financial market, environmental protection biz, gambling dens, food service industry and sold shoes. During these years she also either appeared in or directed over twenty five plays.

Then Nora moved to the wet coast, took up health foods (dark chocolate and red wine) and became a Writer of Elegant Smut. Her ambition is to become a crazy cat lady and wine hoarder, not necessarily in that order.

Read more about Nora at www.norasnowdon.com