A while back, a group of Oklahoma authors came together to write a series of short stories with the recurring theme of a cursed Scrimshaw doll. The curse began in the late seventeenth century when a father feared his daughter’s betrothed would betray her. A gypsy attempted to hex the girl with this spell: All those who betray you will suffer. Only true love can break the curse. As luck (or bad luck) would have it, the girl was holding a Scrimshaw Doll her father had made for her, and the curse went into the doll instead, and therefore, it carried on for centuries. Our first installment picks up with the young woman’s daughter, who has inherited the doll.

These stories, in various genres, all stand alones, were published with The Wild Rose Press as individual releases, but have now been released in two boxed sets, each containing five stories. The first set released today, and the second set, Betrayed, will release next Thursday, August 14th. Volume 2 contains stories from myself, Callie Hutton, Kathy L Wheeler, Tamrie Foxtail, and Anna Kittrell.

From The Wild Rose Press:

Be sure to check out next week’s post. In the meantime…take a look at the fun and exciting stories in Volume 1:

The story that began it all…

I love pirate romances and Italians and strong women heroines and was happy to find a way to combine the three!

One pirate often looked like the other, sunburned and scruffy, but she was certain they’d never met.

The English Lily was inspired from book iii of my Cinderella Series – The Surprising Enchantress, where Lady Esmeralda, Cinderella’s batty-eyed sister is jealous of the prim, very feminine, and definitely normal-fluttering-eyed miss. But Lady Kendra had her own secret, leading to her own story to tell.

She was happy to be his guinea pig, so to speak, although referring to herself as a pig of any sort seemed a bit extreme.

Can love and hope prevail on a deadly journey?

I love genealogy and have always wanted to know where my ancestors came from, how they lived, and what they believed. What decisions they made that trickled down through time and created who I am today. I’m actually descended from one of Pocahontas’s sisters and my several greats cousin was Nathaniel Pryor who founded Pryor, Oklahoma. His fantastic story inspired my ideas behind Trail of Hope.

Hunger pains gnawed at the inside of Sophia’s shrunken stomach. And she stunk. Her dirt wore dirt, and it stunk. 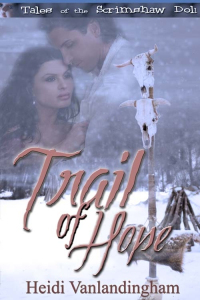 Can a cursed doll and a miracle bring life and love to a dying woman?

A few years ago my husband was given a year to live unless he received a new kidney. We were seven months into that year when he received the kidney. Also, the parrot is modeled after a friend’s parrot.

“When I called yesterday to ask you out, you could have said ‘I wish I could, but I have to go to dialysis.’ See how simple that would be? Short, sweet and to the point.”

A past more terrifying than she dares to imagine

I was living in Oklahoma when I learned that the Scrimshaw Doll series was being planned. When I sat down to pull together a proposal for submission, my characters and the house called Wounded Heart, appeared so incredibly real to me, it was as though they were alive and waiting for me to come into their lives to tell their story. Newspapers across the state were filled with stories of abuse so while my tale is dark, and has to do with that very unromantic subject, the theme is forgiveness. Hero Trent Jones and I learned a lot from our heroine, Rayna Guildbeau, and we’re amazed at her capacity to love and forgive.

“I know when I start finding clues, or relatives, there’ll be no turning back. My life will be different—for good or for bad.”