Please help me welcome Anna Kittrell with the next story in the Friday the 13th Series,  Deadly Illusions… 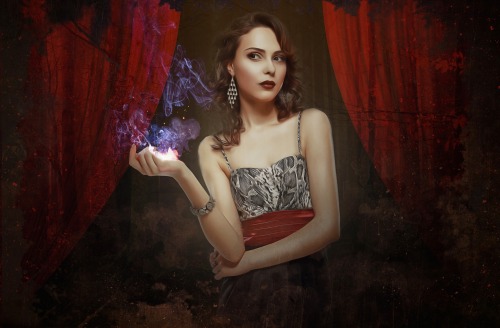 A skilled magician (not unlike a skilled writer) can suspend reality, causing the audience to escape into a different realm. Illusionists emit a sense of danger. They captivate and control, challenging us to believe the unbelievable. And who can keep their eyes from that sexy, scantily-clad assistant who drifts and twirls across the stage before succumbing to the handsome magician’s sinister tricks? Add in some mysterious music and billowing smoke—and wow. That’s entertainment! However, magic is predominantly a men’s profession, with less than 8 percent of magicians being female.

While writing Deadly Illusions, my goal was to have the book’s heroine embody the same commanding power and sensuality I’ve seen exhibited in male illusionists. The end result was Melinda Sloan, a beautiful independent woman with a love for magic that sadly, is rivaled only by her love of alcohol. I enjoyed writing a strong main character with real life struggles, who ultimately triumphs when faced with her demons. And the researching of magic tricks and viewing of wildly talented illusionists on YouTube while crafting Melinda’s stage performances was an exciting and unexpected bonus!

When Melinda Sloan’s dream of becoming a professional illusionist comes true, she’s headed for the bigtime—maybe even Vegas. But when a dangerous illusion goes wrong, killing her assistant and closest friend, Celine, Melinda’s dream turns into a nightmare—and a whiskey bottle turns into a friend. Hopeless, she vows to give up magic forever. However, when Melinda is evicted from the family home, her sister, Julia, convinces her to return to magic—and is dead set on being her assistant. Before long, Melinda is onstage in Las Vegas, doing what she loves most. But when her booking agent demands Melinda perform the very trick that caused Celine’s death, Melinda’s refusal results in a breach of contract. Julia persuades her to do the trick—penniless and unemployed, she can’t afford not to. But as she faces the sword-riddled cabinet that holds Julia, her blood runs cold. Is her baby sister lifeless and bleeding inside the sword box? Has she murdered Julia, the way she murdered Celine? Or is the magician being tricked?

Melinda raised the final sword high in the air, twirled it, then rammed it partially into the box, feeling for Celine’s tug on the blade. With the weight of the audience’s stares on her, seconds felt like hours. What was taking Celine so long?

Finally, she felt a slight tug.

The booze swirled in her stomach, making her sweat. She grunted, pretending to struggle as she shoved the sword further into the box—then struggling for real as the blade met with resistance.

The music reached a maddening crescendo, each chord striking a nerve in Melinda’s pounding head.

How much time had passed?

The whiskey clawed at her throat as the room spun.

Just then, she felt a definite tug on the sword blade. Relief flooded her soul. Celine must’ve had a bit of trouble navigating the final blade around the others.

What had it been—five seconds? Ten at most?

Melinda shoved the sword down with all her might, feeling no resistance from Celine. The sword slipped easily through the box, into position.

Confidence soaring, Melinda placed a hand on the box and pranced in a slow circle, turning the platform, showing the spectators every side. She faced the box toward the audience.

Time to retrieve the swords and open the box. She loved this part. Celine would be sitting straight up, beautiful as ever, without a scratch on her. The audience would go wild, like they always did.

Melinda removed the first sword, followed by the others, saving the sword jutting from the top of the box for last. Grasping the handle with both hands and closing her eyes, she made a show of slowly pulling the sword from the opening, Excalibur-style, and holding it above her head.

The music stopped. Shocked cries punched through the silence as something warm dripped onto her face.

Who was cruel enough to yell out a thing like that? Sick bastard. The horrible word stuck to her, burning like hot tar.

Anna Kittrell resides in the same small Oklahoma town where she grew up, and has been a secretary at Anadarko Middle School for over twenty years. She married her high-school sweetheart, raised two children, and has an eight-year-old grandson who is her very best friend.  She has written for as long as she can remember and still has many of her tattered childhood creations—stories she used to sell on the playground for a dime, penned on notebook paper. Her love of storytelling has grown throughout the years, and she is thrilled her tales are now worth more than ten cents.