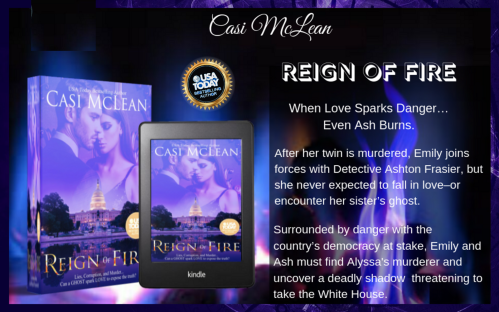 To expose a faction threatening America’s democracy, Emily Rose joins forces with a team investigating her sister’s murder, but she never expects to fall in love – or to encounter her twin’s ghost.

Ashton Frasier accepts his detective career choice means a life of bachelorhood – until Emily Rose blows into his world. The spitting image of his latest victim holds a mysterious allure he can’t deny. Surrounded by danger with the country’s democracy at stake, Emily and Ash uncover a dangerous faction threatening to take the White House. Can a ghost spark love to expose the truth?

Casi’s powerful memoir, Wingless Butterfly: Healing The Broken Child Within, shares an inspirational message of courage, tenacity, and hope, and displays her unique ability to excel in nonfiction and self-help as well as fiction. Known for enchanting stories with magical description, McLean entices readers in nonfiction as well with fascinating hooks to hold them captive in storylines they can’t put down.

Her romance entwines strong, believable heroines with delicious hot heroes to tempt the deepest desires then fans the flames, sweeping readers into their innermost romantic fantasies. Ms. McLean weaves exceptional romantic mystery with suspenseful settings and lovable characters you’ll devour. You’ll see, hear, and feel the magical eeriness of one fateful night. You’ll swear her time travel could happen, be mystified by her other worldly images, and feel heat of romantic suspense, but most of all you’ll want more.

Kristin “KJ” James was born and raised in the Nashville, TN area. Acting has always been a passion of hers. Starting on the stage as early as preschool, KJ pursued her passion into college where she received a BA in Communication with a double emphasis in Theatre and Public Relations from Mississippi State University. After college she found herself more and more drawn to voice overs. Several classes, coaching sessions, seminars, research, and a closet-turned-studio later, and she now records and produces audiobooks on a regular basis. She has also done several radio commercials for clients such as Advance Financial, TriStar Health, and GAC.

When she’s not in her booth, you can find her crocheting, playing video games, or running agility with her dogs.