Author Meredith Bond ~ Through the Storm

Do you see magic all around you? I do. There are some things that, to me, just can’t be explained to my satisfaction. Science. Music. Medicine. Charisma.  How does a scientist come up with the connections she finds? How does she even know to look, let alone where to look?  How can a musician — trained or untrained — create something so beautiful it takes you away on a wind of sound and pleasure? Or conversely, create such noise you wonder how anyone could call that music — and yet, thousands do?

Do you ever stop to wonder how these people do these miraculous things? What about artists? Doctors? Mechanics, yes, mechanics! Anyone who can figure out how to take apart an engine and put it back together again and have it not only work, but work better is, to me, awe inspiring. How do they do that?

It’s got to be magic. There’s no other explanation that I can find. And so, I have expanded on this theory to create a world where the people who can do these amazing things — things which set them apart from the bulk of society — are magical people called Vallen (a Latin word for powerful).  Their magical abilities are inherited, with some Vallen having more power, more ability, than others, but each succeeding generation loses some of their power.

The Vallen are dedicated to using their power for the good of ordinary people and ordinary society. Those who use their power to harm others or for their own advancement (to the detriment of others) risk having their power taken away.

The first high priestess was Morgan Le Fey, of Arthurian legend, and all high priestesses are her direct descendants, with the seventh child of the family being the one to inherit the position and have it pass down through her line. Naturally, the seventh child of every seventh generation is particularly strong and is the only one who has the power to renew the magical ability of other Vallen (those who have lost it through succeeding generations)—they’re called the Seventh. When there is a Seventh (every seven generations) a Sixth is needed to be the keeper of the laws while the Seventh is re-empowering the people.

But being the Sixth isn’t a great position to have – especially not for Kat Haveland, who just wants to have a normal life, be brought out into society, fall in love and get married like any normal Regency girl. The thing is, fate seems to have other plans for her.

Oh wow, Meredith…fascinating! I love how you came up with the idea, and the cover is magnificent! Thank you so much for joining me today! 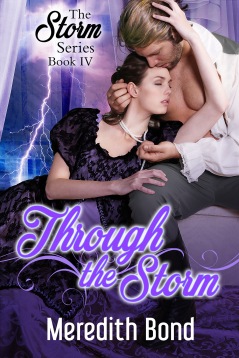 Some plans are made to be broken…

Being judge, jury and executioner for the magical Vallen people is Kat Havelock’s hereditary duty, but she’s desperate to live a normal life. Sometimes even just a few minutes for herself would be amazing. Her plan is to enter Regency society, fall in love, and live happily ever after.

Jack the Lad, the notorious smuggler, has a single-minded quest to destroy his wealthy and intolerant father, who had driven Jack’s late mother to penury and despair. It has taken him ten years, but now the powerful Vallen is finally ready to put his plan into action.

When Jack tries to use his magic for revenge, Kat is obliged to stop him. He convinces her to give him another chance, entangling her into his vengeful scheme. Can Jack and Kat carryout their dreams? Or does destiny have a better plan to steer them together through the storm?

Kat could hear the hysterical tears all the way from the library. With a sigh, she stood up from the table where she’d been attempting to read through the cramped handwriting of one of her ancestors and prepared herself for the inevitable knock. It came faster than she expected.

“I beg your pardon, Miss Havelock,” said Michael, the footman, his voice shaking slightly. Kat couldn’t understand why he sounded so upset when they had been dealing with these magical problems almost non-stop for the past nine months. They’d started out with as many as twenty visitors per day, but more recently it had trickled down to no more than five, thank goodness. Ever since last summer when her cousin Morgan had been elevated to high priest and took on the role of the Seventh—as the seventh child of the seventh child in the seventh generation he was tasked to re-empower all the Vallen—people hadn’t been able to control this increase in their magical abilities.

Normally it would have been his job, as high priest, to help with magical mishaps, but since he was off empowering people throughout the country and enjoying being newly married, Kat was left to deal with problems in London and the surrounding area.

It was almost her job.

When Morgan had been made the Seventh, Kat, as the sixth child of the sixth child in the family, was tasked with being the Sixth, keeping the laws of their people. They were pretty simple laws—do no harm to others and don’t profit illegally through the use of magic. But now she also had to deal with this…

“What is it, Michael?” she asked the footman.

“A woman, Miss. Her hands are on fire,” he said, holding the door for her as she started down the hall.

Kat paused and half turned back to him. “Did you say on fire?”

Kat spun back toward the front of the house and walked more quickly. “Oh, dear,” she breathed. As she approached the drawing room, she could smell the heat of fire.

The woman was dressed in scullery maid’s clothing, covered with soot and singed in a number of places.

“Help,” the woman cried as soon as Kat walked into the front parlor where all visitors, regardless of rank, were to be brought. “Oh, please, help.”

Bio: Meredith Bond’s books straddle that beautiful line between historical romance and fantasy. An award-winning author, she writes fun traditional Regency romances, medieval Arthurian romances, and Regency romances with a touch of magic. Known for her characters “who slip readily into one’s heart,” Meredith loves to take her readers on a journey they won’t soon forget.

Merry has two independent children and a loving, supportive husband. She is currently living in Europe enjoying the Bohemian life.

13 responses to “Author Meredith Bond ~ Through the Storm”