Bringer of Chaos: Forged in Fire The Sempervian Saga (Book 2) by Kayelle Allen

Bringer of Chaos: Forged in Fire 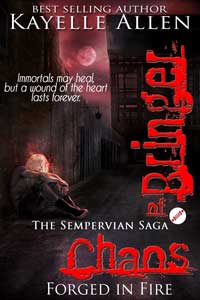 Humans created the Ultras, a genetically enhanced race, to defend mankind. Instead, Ultras became their greatest threat. With the help of traitors, humans captured half a million of the immortal warriors.

Exiled to an alien world with no tech, no tools, and no resources, their leader, Pietas, must protect his people, find food and shelter and unite them. But before he can, he must regain command from a ruthless adversary he’s fought for centuries–his brutal, merciless father.

Ultras are immortal, and no matter how they die, they come back. Reviving after death isn’t all it’s cracked up to be. Some wounds heal instantly and a few take time, but battered and broken trust? Immortals may heal, but a wound of the heart lasts forever.

Rating: PG13 for violence, no profanity or explicit content

A Thunderclap campaign has been set up, we sure would appreciate your support. Please click here to add your support.

In this scene from Bringer of Chaos: Forged in Fire, Pietas and the search party sent to find him have stopped their upward mountain trek for a short break. Prior to their reunion the previous day, Pietas had spent a year in confinement, hands bound behind him. He’d been starved to the point of death, but because he’s immortal, he could not die. Although he’s healed since, the brutality left a lasting toll on his once robust physical body. As they prepare to get underway, he unwittingly reveals the impairment.

Wincing, Pietas stretched to ease cramps in his back.

His sister stood. “Tas!” she called up to him. She’d started using her childhood name for him since they’d reconnected the day before. “Are you hurt?”

A quick telepathic scan from Joss swept over him before he realized it was there. Pietas had still been a teenager when she’d trained him to shield his mind from those with her gift. Not that he’d ever been able to block her. She was far too powerful, but today, she’d read him with no more difficulty than a hunter spying trail signs. He’d been near no Ultra telepaths for over a year.

His affinity with Six had made him careless and he’d neglected the basic lessons Joss had taught him.

It wasn’t a lack of trust. Trust had never been an issue with Joss.

He treasured her, but he ought not to have been so unguarded and open. Vulnerable.

“Pietas.” Joss stood. The waves of emotion he picked up from her held love and concern in equal measure. And a bit of disappointment. “You’re injured.”

He ducked his head like a schoolboy who’d forgotten his lessons. Admit mortals had damaged him? Never. Neither would he lie about it. He’d take better care to hide the pain.

“Don’t worry about me.” Whistling, he circled a finger in the air. “Let’s go! Long climb ahead.” He leaped down from the rocks. “Joss, you lead.” Last thing he wanted was her behind him, using him as an object of focus.

What telepaths focused upon, they controlled.

Bringer of Chaos: The Origin of Pietas 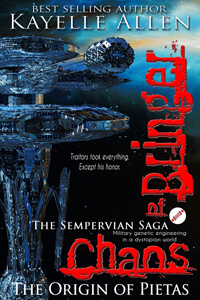 Why should Pietas end the war with humans?

His people are winning, yet they insist on peace talks. The Ultra people want to grant humans a seat on the Council. Pietas ap Lorectic, Chancellor of the High Council, War Leader and First Conqueror, disagrees. What’s best for mortals is oppression, control, and if necessary, elimination.

Pietas seethes with rage at the idea of human equality. Humans might have created Ultras, but the creation has far surpassed the creator. Humans die. Ultras are reborn, no matter how grievous the injury. They have no equals.

His people permit him no choice. He must attend these insipid peace talks on Enderium Six and what’s worse, be polite. To humans.

When a human special ops warrior is killed in battle, he’s resurrected in a secret process and inducted into the Ghost Corps. He’s given enough strength to perma-kill immortal Ultras. Ghosts are the most hated and feared of warriors.

When the ghost entraps and captures Pietas at the peace talks, the two begin a long journey toward Sempervia, an isolated and forgotten world. Once there, Pietas is marooned and the ghost abandoned alongside him. The two must either fight to perma-death, or join forces to survive.

As Pietas comes to trust the human, an unlikely and awkward friendship begins. Until he discovers how ghosts are resurrected… 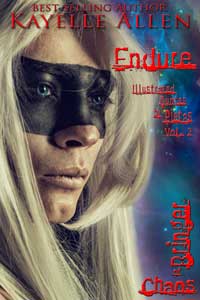 Free — download Endure, Illustrated Quotes by Pietas (as told to Kayelle Allen). Enjoy an exclusive collection of quotes on the concept of endurance by the man known to other immortals as the Bringer of Chaos. https://kayelleallen.com/media/30-days-endure.pdf

Download a free adult coloring book you can print and share. Relax and color with friends. It’s fun! https://kayelleallen.com/media/pietas-coloring-book.pdf 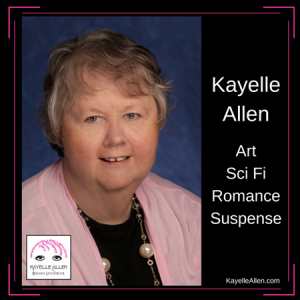 Join the Romance Lives Forever Reader Group Download four free books and get news about books coming soon. You can unsubscribe at any time.

2 responses to “Bringer of Chaos: Forged in Fire The Sempervian Saga (Book 2) by Kayelle Allen”