Got two minutes? Then check out this week’s quick tip ~ Giving your story more impact by giving your characters more dialogue

Hello and welcome…I am a freelance editor and an editor for The Wild Rose Press, as well as an author. I often struggle with my own writing, and I have found that sometimes, a little reminder of ways to improve the process can be helpful, so, I like to share these moments of brilliance with others :). But, in this busy world of ours, who has time for pages and pages of writing tips? That’s why I’ve condensed mine down to quick flashes you can read in (approximately) two minutes. Enjoy…

Disclaimer: All of my tips are suggestions, and are only my opinion. And, for the most part, there are exceptions when going against my advice will make your story read better. Take what works, leave the rest.

Everyone knows readers like to read dialogue, so be sure to capitalize on every opportunity to put more words in their mouths. Also, it can often bring a little more impact and depth to a scene. So, why have your characters think something when they can actually say it?

Here are a few examples from some of my stories, the first two being published works where it’s too late, but looking back, my characters should have said it, not thought it…

“I’ll have none of this nonsense at a school function. Rock and roll? Are you out of your mind?”

No rock and roll? No Everly Brothers or Little Richard or Buddy Holly? No….Elvis?

“But, sir. The kids are really looking forward to it. We’ve sold more than three-hundred tickets so far, and we just know we’ll sell more. That’s over three-hundred dollars for Miss Murdock’s expenses—well, once we deduct the operational costs. Many of the kids will want their money back if we don’t have rock and roll music at the dance. Besides, Miss Murdock already gave her approval, before she had to retire.”

Mr. Rivers crossed his hands on the top of his desk. “It doesn’t matter how many tickets you’ve sold. I’m in charge now, and I’m not going to coddle students like Miss Murdock did. I won’t have my kids exposed to that devil music, especially that vulgar, immoral Elvis the Pelvis.”

“Vulgar? Devil music?” Toby clenched her fists. It made her so angry when older people spoke that way about rock and roll, especially about Elvis. He was a nice boy, respectful and polite. Kind to his fans, to his mother. And he was the dreamiest. “Rock and roll is not devil music. It’s just a way for kids to have fun, to have their own—”

As it could have been:

“Vulgar? Devil music?” Toby clenched her fists. It made her so angry when older people spoke that way about rock and roll, especially about Elvis. “He’s a nice boy,  respectful and polite. He’s kind to his fans, to his mother.” And he was the dreamiest. “Rock and roll is not devil music. It’s just a way for kids to have fun, to have their own—”

There was really no point in only doing it in narrative. This gives her a little more backbone, I think.

I nodded. “It wasn’t their fault. Katie’s parents knew my parents were going out. Knew we were spending the night in the back yard. It was a safe neighborhood. They weren’t worried. But after…” I shrugged. “I guess they just needed someone to blame.”

“I’m sure they did,” Lane said, but I was barely aware of him speaking. I was lost in that time. Now that I had started, it all kept pouring out.

“Although Mom and Dad felt guilty, they were defensive when Katie’s parents accused them. It caused a huge rift, and they never spoke again. Funny, but Katie’s parents didn’t hold it against me or Josie. As a matter of fact, I became even closer to them as the years went by. Katie was an only child, and I guess it helped to have me around. My parents didn’t mind. They felt terrible about what happened. Almost guilty about the fact that they had four children left when the Broussards had none. My brothers were devastated. Especially Gabe, since he was left in charge. Coburn, as usual, was a rock, but Mitch and Gabe went to pieces. It had the opposite effect on each of them. Gabe, who’d been wild and out of control, settled down, became quiet. Wound up becoming a priest. Mitch went a little crazy for a few years. Got really heavy into drugs. Josie did, too. Only, Mitch came back.”

“Must have been horrible.”

We started junior high that year. It was miserable. I already had a reputation for being a little morbid since my dad was a mortician. After Katie’s death, rumors circulated about my family being cultists. About how we’d put some kind of curse on her. Some even said we’d sacrificed her in a ritual and eaten her flesh. Josie became a stoner and I became an outcast. My brothers, oddly, went unscathed. They were just too good-looking and had too much personality to let a little thing like ritualistic murder affect their popularity.

As it could have been:

“It was. We started junior high that year. It was miserable. I already had a reputation for being a little morbid since my dad was a mortician. After Katie’s death, rumors circulated about my family being cultists. About how we’d put some kind of curse on her. Some even said we’d sacrificed her in a ritual and eaten her flesh. Josie became a stoner and I became an outcast. My brothers, oddly, went unscathed. They were just too good-looking and had too much personality to let a little thing like ritualistic murder affect their popularity.”

I think this is not only less boring, being in dialogue, but it opens her up a bit to Lane, the guy she’s falling in love with.

Lastly, and very briefly, in my latest WIP, Evil Eye, I am writing a rough draft and I have a scene where my protagonist’s dad has been roughed up by some bad guys to whom he owes money. (He’s an addicted gambler/alcoholic). He wants Scarlet (my protagonist) to ask her estranged, criminal sister for the money. I wrote it like this:

Scarlet twisted a strand of hair and tucked it behind her ear. “I can cash in my retirement, but I’ll only get half of what you need. I’ll take that to them, let them know I’m a cop. Maybe I can convince them to settle for that. At least for now.”

Her dad groaned out a sound that was something between a laugh and a cry. “These people don’t make deals and they aren’t afraid of cops.”

“Do you have a better idea?” Irritation sharpened her voice.

“Yeah, I do. You can ask Ivory. She’d as soon spit on my corpse as to look at me, but she’d do anything to connect with you again.”

Scarlet would rather take a beating from Hector’s goons than speak with her sister, but was she willing to let her dad be killed? She let out a weary sigh. “Fine, I’ll talk to her, on one condition.”

Then I realized that  it might play better, have a little more impact and get across to her dad just how reluctant she is, if I turned it into dialogue:

Scarlet snorted. “I’d rather take a beating from Hector’s goons than see Ivory.” But, was she willing to let her dad be killed? She let out a weary sigh. “Fine, I’ll talk to her, on one condition.”

What do you think? Is dialogue often better? We can’t always apply this. After all, we don’t want a story with nothing but dialogue. Plus, our characters often think things that definitely shouldn’t be spoken aloud. But, perhaps keep this in mind as you’re polishing, even if you don’t do so in the first draft. Are there things your characters can think that they’d be better off saying?

Until next time…happy writing!

I am releasing an e-book with a collection of Two-Minute Tips I have shared on my blog. Now, you can have them in one convenient place for easy reference. Pre-Order price is 99¢ – Regular price will be $2.99.

*** If you would like to send me a few sample pages (around 7500 words or so, even though I will not edit that many on the blog. It just gives me more to choose from) for me to edit and share on an upcoming blog post, please do so in the body of an email to AliciaMDean@aol.com. Please use the subject line: “Blog Submission” This is for published or unpublished authors. In the email, please include whether you would like me to use your name or keep it anonymous, and whether or not you would like me to include any contact info or buy info for your books. Also, you can let me know if you would like for me to run my edits by you before posting on the blog. Please keep in mind, this is for samples to use for blog posts. I will not edit or use samples from all the submissions I receive, but I will use as many as possible. 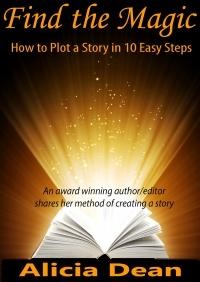 How to write a novel? That is the question. There are probably as many answers to that question as there are people who ask it.

Wanting to write and actually doing it are two very different things. I am well acquainted with the sometimes grueling process of churning out a story. Over the years, I have tried many methods for creating and completing manuscripts, and have tweaked and honed it down to a workable (for me) process.

Using specific examples from one of my own novels, Without Mercy, I share my method in this mini how to book. The first eight steps actually deal with plotting while the last two are designed to help expand your outline into a well-developed draft. There is no one, perfect way to create a story, but there will be a method, or methods that work for you. I’m not sure if this is the one, but it works for me. Only you can decide if it also works for you. Fingers crossed that it does!

*** Warning – Please do not purchase without reading a sample. (This is solid advice for any book, fiction or non. If you are not intrigued in the sample, you will likely not enjoy the book)

Filed under For Writers, Promo Tips, Tips from an Editor