Riviera Boulevard in Vegas is being renamed Elvis Presley Way. The road will start at Las Vegas Boulevard, cross Paradise Road and loop through the valet area of the Westgate, where Elvis launched his comeback in 1969. Back then it was called The International. The name was later changed to the Las Vegas Hilton, then in 2014, was renamed Westgate.

I would say the renaming is way overdue. Elvis’ success and impact in Vegas is legendary. After his ’68 TV special and eight years of making movies and not performing, Elvis was nervous about returning to live performances. But, wow, did he ever knock it out of the park. Elvis had an eight-year run of sellouts in the 1,150-seat main theater. Previously, his record of sold-out shows from July 1969 to December 1976 was listed as 837. But, after research, Graceland’s chief archivist revised the number to 636 last year as Graceland’s partnership with Westgate was being worked out.

A Billboard’s review from Elvis’ opening show in Vegas, July 31, 1969:  “It was not the Elvis with the rough edges of the middle 1950s on stage Thursday. It was a polished, confident and talented artist, knowing exactly what he was going to do and when … it was the Elvis of the past as he ‘Put the feeling into the songs, and let the vibrations of the music have their say, swinging hips, revolving pelvis and moving shoulders.’”

Elvis closed at the International on August 28, 1969. Two weeks later Varietyreported the record numbers. During the engagement’s 29 shows, Elvis set Las Vegas attendance and gross records. With the minimum charge set at $15 per customer, the 101,509 attendees paid a total of $1,522,635 to see Elvis. Average attendance in the 2,000-seat capacity show room was 1,750. Weekends were standing room only. Following Elvis at the International were his recent movie costar, Nancy Sinatra, along with the Osmond Brothers.

This ad for That’s the Way It Is, which was comprised mainly of Vegas rehearsals and performances, gives us a good glimpse into what those concerts were like:

I assume most everyone has heard that Elvis’ physician, George Nichopoulos, passed away on Wednesday at the age of 88. A lot of controversy has surrounded him since Elvis’ death. He was charged with over-prescribing to Elvis, but acquitted. However, his license was finally stripped in 1995 because of the same type of accusations. I won’t go into detail about my feelings on ‘Dr. Nick’ as he was called, and I know Elvis was a grown man, but I also know that Dr. Nick was a trained, professional physician, and Elvis placed his care in the man’s hands. I think he was greedy and careless and thoughtless and that he contributed to Elvis’ death, even though I can’t solely place the blame on him. I will say, I think it’s tragic that he lived more than twice as long as Elvis did.

I have been collecting Elvis items for as long as I can remember. In 1972, we had a house fire that wiped out most of our belongings, including my Elvis collection. I started all over. One year, during a move, I lost another box of Elvis memorabilia. I thought I’d lost the collection of Elvis LP’s I owned, because I hadn’t seen them in years. Last weekend, I was organizing and rearranging and I went through a few old boxes I’d had packed away for a long time. Guess what? I discovered my album collection! I discovered some other items as well, but I cannot begin to express how thrilled I was that I hadn’t actually lost them. I have over 30 albums, including a multi-record set. They are very old, the covers are tattered and I’m not sure if many of them will still play, but I treasure them. A neighbor was helping me unpack the boxes, and he was blown away by the Elvis pictures, albums, knick knacks, etc, that I have. He said that I should sell them, that many of them  were probably worth a lot of money. I just don’t think I can bring myself to part with them. When Elvis passed, my sisters and I were appalled at all the people who came out of the woodwork trying to turn a buck off of his death. I swore I’d never be one of those people. I’m not really sure the items would sell for that much, anyway. If the albums were in pristine condition, they probably would. But, they are worn and frayed and well-used, well-loved. They’re worth much more to me than any money I could make off of them.

Here are just a few… 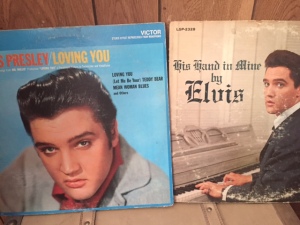 As I said, I’ll treasure them and do not wish to sell. But, just out of curiosity, I might check around and see if they actually do hold any monetary value.

18 responses to “Ramblings of a Lifelong Elvis Fan – Part 73 – Renaming a Road in Vegas ~ Dr. Nick ~ My Memorabilia Discovery”