Where did you get the idea for Redeemed by a Rebel?

I was watching the HBO series Deadwood and became enraptured with the time and the place. I thought it would make a great place to put a western romance. And, of course, I had to make a research trip. Unfortunately it rained, hard, the whole three days we were there, so I didn’t get to see as much of the old town as I would have liked. They do have a couple of really nice museums though.

What book have you read that you wish you would have written?

Any and all by Johanna Lindsey or Julie Garwood or any of my other favorite authors.

What’s the main thing that you could get rid of in your life that would give you more writing time?

Cleaning house. I hate it and finally have hired Merry Maids to come in twice a month. It’s wonderful.

What do you want readers to come away with after they read Redeemed by a Rebel?

In general no review because a bad review will bring down your overall rating. Although I’ve seen some one star reviews that weren’t that bad, but I still wouldn’t want them on my book.

If you could change something about one of your books that’s already released, what would it be?

I am changing them. My first books didn’t have proper editing and I’m redoing them. Although they are my most popular, there are some things I’m changing about them. Clarifying the story line, that kind of thing.

Thank you for joining Cynthia and I. We hope you enjoyed learning more about her. Now, for a little more about her book. (quite frankly, I’d like to get to know the shirtless hottie on the cover a little better ;)) 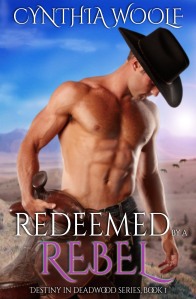 Jake Anderson killed a man defending his fiancée from a brutal attack, but lost her and his freedom in the process.  Now he’s on the run, tormented by the need for vengeance.

Becky Finnegan will do anything to escape her drunken father’s fists, including slave away at their mine.  Her only hope is to strike gold and make a new life for herself somewhere far, far away from Deadwood.  But then Jake arrives and does the unthinkable…forces her to feel, to hope…and to love.

Jake would give his life to protect Becky, but all he can offer her is a broken heart, a criminal’s life, and a past haunted by failure.  How can he save her when he’s already lost himself?  Will he destroy everything, or can the beautiful rebel redeem Jake’s lost soul?

The iron pressed against Jake Anderson’s back was almost as cold as the rain pouring out of the night sky.

“Knock on the door,” demanded his brother Zach, his voice angry and on edge.

Jake did as he was told and pounded on the front door, hard enough to be heard over the din of the rain.

“What the hell?” said his eldest brother, Liam, when he opened the door. “Jake? Zach? What are you two doing here? It’s the middle of the night.”

Zach growled from behind Jake. “Are you going to let us in or make us stand in this rain all night?”

“Can’t until the kid here,” he poked Jake in the back with the gun, “is inside and we’ve talked to you.”

Jake walked into the foyer of the house his oldest brother owned in St. Louis. Steamer trunks and carpet bags lined the hallway down to the parlor.

“Sorry to do this to you, Liam. I know you’re leaving tomorrow,” said Zach, laying his hat on one of the trunks.

Jake threw his hat on the trunk next to Zach’s.

“Yes. At first light. Now, tell me what’s going on and why you brought Jake here at gun point,” said Liam.

“Only way I could get him to come.”

“And?” Liam said, exasperated. “Don’t make me beat the story out of you word by word, little brother. Just tell me the problem.”

Liam pointed at the two chairs in front of the fire, then went to the fireplace and stoked the banked coals to life. He added a piece of wood to the tiny flames before he turned once again to face them. “Jake. You first,” he said in a tone that brooked no argument.

“I killed an army captain,” Jake said, refusing to sit. He couldn’t sit. Couldn’t be still. He wanted to scream at the injustice, shout at God for his betrayal.

“Why’d you do a damn fool thing like that?”

Jake shrugged. “I didn’t have a choice.”

Zach put away his gun. “No, there’s not,” said Zach. “There was reason for it, but he did kill the man. I use the word ‘man’ loosely.”

“Damn it, Jake. They’ll hunt you down and hang you for this.”  Liam had been a colonel with seventeen years service, Jake knew he was familiar with military justice.

“The son of a bitch deserved to die. And as soon as I can, I’m going to kill the other bastard, too.”

“Jesus!  You two had better tell me what’s going on. Start at the beginning.”

You can find Redeemed by a Rebel here:

23 responses to “Visiting with Cynthia Woolf”